Only in looking back do you find those crumbs you dropped that marked your way forward.”

-from A Year in the World, by Frances Mayes 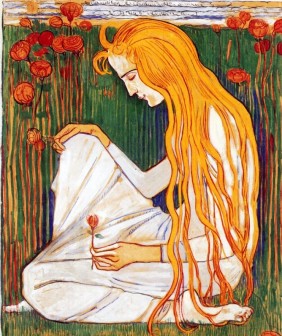 Tomorrow, I begin my new job.  I am both perfectly aligned–and terrified.  Let me tell you about the alchemy of this alignment~

The summer before last, an author found her way to me. Her name was referenced in a memoir that I was reading at the pond, and then I heard her interviewed on the radio on my way home that same afternoon.

Struck by this coincidence, I went to the library and picked up whatever I could find, which were novels about Chile.

Though I typically prefer non-fiction, I found myself caught up in her sweeping epics–romantic, bold and bittersweet.  It was an inexplicable fascination, until now.

That following spring, I was walking with a friend when she happened to mention that she had tickets to see this same author! in Portsmouth, New Hampshire, but unfortunately her partner would be out of town.

“Take me!” I gushed, without care for propriety.  And so she did.

The ticket to that show has marked the place in my journal ever since, and the name of that author–the sensuous Isabel Allende–continues to delight my mouth, as her stories of Chile delighted my senses.

It was my intuitive Irish mother who taught me to pay attention to life’s synchronicities such as these; but to be fair, my father’s Jewish family gave credence to them too–when it had to do with numbers. We were all dazzled when my grandfather, who was born on 11-17-1919, died on his birthday, on 11-17-1991, for example.

This passion for numerical symmetry explains just how special it was that I was offered this important job on 11-11.  For years, I had been staring at those numbers each time they appeared on the clock or randomly elsewhere, wondering about their significance.

What was equally striking was the news that this position would require me to travel–something I had longed to do again, but couldn’t imagine possible. That the annual conference was held last year in the most romanticized destinations of my youth–Paris–was clearly a nod of alignment.

But when I found out the location of this year’s event, I was humbled beyond reason–Santiago, Chile. Suddenly, the dream that woke me months earlier, commanding that I get my passport, made sense, as did my absorption with the novels about this country.

The fact that I had been looking for the right position for several months, yet couldn’t find a thing–until I got clear around my next writing venture–was another powerful display of the alchemy of alignment.

For months I sensed that something new needed to happen around my writing, and I decided that I needed a job to financially and emotionally support that (and my family.) Simultaneously I clung to the freedom that I had without outside employment because I had no idea where my work was heading.

Once I acknowledged these fears, allowing my writing to be in place of not knowing, it began to take shape, and suddenly, one after another, jobs of interest began to appear.

The relief of employment was soon replaced by the fear of a wrong fit, and I suspected that I was too picky, or even worse, spoiled. Though I had promised myself that this time I would  look for a job from the inside–out, I couldn’t bear to wait any longer, mentally or financially.  Once again,I resigned myself to grasping after roles that missed the mark.

When the day came to accept a position that was good enough, my insides wouldn’t stop bucking.  In my desperate desire for alignment, I searched the want ads one last time, and was able to see past a job description that I didn’t think fit, allowing me a soft tumble into the waiting arms of something extraordinary.

After that, the path unfolded so effortlessly that I could hardly bear it…