When school and mosque and minaret
get torn down, then dervishes
can begin their community.

Not until faithfulness
turns to betrayal
and betrayal into trust
can any human being
become part of the truth.

The devastation at Plaza Towers Elementary in Oklahoma evokes praise of teachers as heroic–deserving of greater respect (and even more money)–but that line of thinking makes me wince.

Wouldn’t most adults protect a child in a crisis?

What children need to survive (and thrive), day in and day out, is steady care; and that’s what teachers give, every day, and that is truly heroic, as any parent can tell you.

The excruciating grief we feel when harm comes to children inside schools reveals how much we trust these institutions. We entrust schools with innocence. And when that innocence is violated, as it was in Moore and Newtown, we are shattered. It is this ongoing trust, this super-human expectation of schools, that make teachers worthy of our devotion (and dollars); and yet morning circles and afternoon chapter books and daily playground disputes don’t grab our attention (and pocketbooks) like stories of shielding children from bullets or collapsing walls.

Tragedy is both sensational and sobering–capturing our flickering attention–while fiercely aligning us with what truly matters.

Look how swiftly we met the basic needs of water, food and medical attention in Oklahoma–without debate or policy–and without care for race, religion, political party, sexual orientation, citizenship or employment status.

No one can deny that this Nation has a big heart.

But it accompanied by a muddled mind.

Take Sandy Hook for instance. More than 800 volunteers were needed to sort through all the teddy bears and food and supplies and money, and all manner of support, until they finally had to say: “No more!”

Meanwhile, children continue to be killed by guns all over the country at (what should be) alarming rates.

This paradox of attention reminds me of a film that I saw just before becoming a parent myself. “The Paper,” was directed by Ron Howard, featuring the news industry, with a pinnacle scene between a news guy and his (very, very) pregnant wife.

Actors Marisa Tomei and Michael Keaton argue on the sidewalk outside a New York City restaurant, where Keaton, a newspaper editor, arrives late, again. Tomei, who also worked in the industry before maternity leave, screams at the top of her lungs after Keaton informs her that he has to head back to the paper as he efforts to calm her down.

“I know I’m shouting,” she says. “Don’t you notice? I keep talking louder because you haven’t heard.”

“I swear to God I will be there,” he tells her. “You mean more to me than anything else. You know that.”

“Let me give you a hypothetical,” she says.

“Really?” he asks, looking at his watch.

“A guy breaks into the apartment. He’s got a gun, holds it to my head. He says, ‘I blow your wife’s brains out or I blow up the “(News) building.’ Choose. Now. What do you say?”

“What do you think I say?,” Keaton asks Tomei. “It’s ridiculous. It’s not gonna happen.”

“That is exactly my point,” Tomei says.”It is never one big dramatic choice. It is little situations every day… and you’re either there or you’re not. If you keep waiting for the guy with the gun to show up, it will be too late.”

Tragedies, like Moore and Newtown, are the guy with the gun, reminding us of what is at stake, but truly caring for others means acting on their behalf, day in and day out, not dismissing them until a crisis captures your attention.

As Americans we must begin to make choices, every day, that sustain life, rather than maintain a way of life. 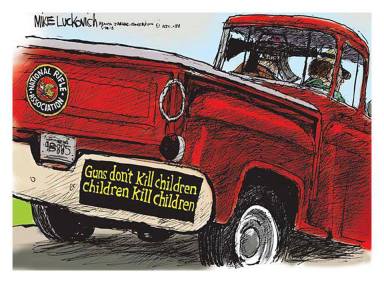 Note: I worked on this post for over a week (a rarity for rapid blogger like me) and I still failed to clearly communicate my reflection on our culture. Perhaps turkey can help. A young Tom appeared in my yard in the South every day while I struggled with this piece. Once I published the post, he appeared in the East, with his back toward me, fanning his feathers before flying south into the woods.

Turkey is actually thought to be the Give-Away Eagle or South Eagle of many native peoples. The philosophy of give- away was practiced by many tribes. Simply stated, it is the deep and abiding recognition of the sacrifices of both self and others…
Spectators unfamiliar with the cultural phenomenon of the pot latch or give-away ceremony are often mystified by it. A tribal member may gladly give away all he or she owns, and do without in order to help the People. In present-day urban life, we are taught to acquire and get ahead. The person with the most toys wins the game. In some cultures, no one can win the game unless the whole of the People’s needs are met. A person who claims more than his or he share is looked upon as selfish or crazy or both. The poor, the aged, and the feeble have honor. The person who gives away the most and carries the burdens of the People is one of the most respected.Source: Sams, Jamie and Carson, David; Medicine Cards
(Santa Fe: Bear and Company, 1988)