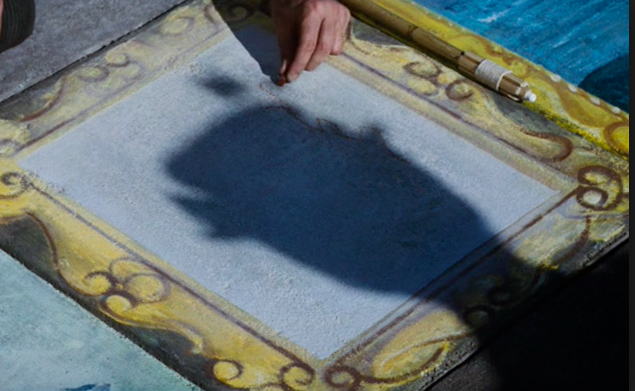 Arriving in Paris was like arriving in a dream, like jumping into one of Bert’s paintings on the sidewalk outside the park, only Mary Poppins wasn’t holding my hand.

It occurs to me that I was living in London at the time, 1984, just after the IRA bombed Harrods at Christmas and just before the explosion at Heathrow Airport ahead of my flight back home.

I knew I would love Paris, had imagined it forever, and even though I was arriving in February instead of May, with a few classmates instead of a lover, on a quick weekend instead of a vacation, I was determined to fall in love, even while the Yanks and the Brits were unanimous in their opinion of the French.

My grandmother studied French at Douglass, dreamed of working at the United Nations, helped me with my homework translations of the Le Petite Prince, and spoke of the trips we would take abroad together, which tragedy stole.

As a 20 year college student, my trip to Paris looked something like this—a steep walk (with my backpack) down the hill from the residence in Hampstead, a Tube ride with a transfer to Charing Cross Road, the train out of London to the White Cliffs of Dover, another steep walk down hill to the dock, an all-nighter on the ferry across the northern seas of the English Channel (no Chunnel yet), and finally another train from the North of France in Calais to Boulogne and from Boulogne to… PARIS!

I arrived in the early morning. It was cold, I hadn’t showered and I was traveling with women I barely knew (I preferred the company of men for their simplicity); but I was in Paris, with francs in my pocket, so eager was I to be at ease in this city that I’d had exchanged pounds before departing London.

Upon arrival, we crossed the street from Gare de Nord and my companions entered a bank, while I said:”I’ll take a little walk.”

“Are you sure?” they asked.

“I’ll just walk around the block,” I assured them.

It was a dull, gray morning, without an ounce of romance, except in my mind, until an old man came out from a doorway and said, in a gruff voice: “Bonjour.”

He stepped in beside me and so eager was I to practice my French with a real Parisian that I slowed my pace to his turning one corner, and then another.  “Je parle seulement un petit peu de francais,” I explained, as he grew irritable about something I wasn’t quite understanding, something about money; and eager to part, I must have misunderstood or misspoken because before I turned away from him to find my companions, he reached out and grabbed my breast, which was covered by a puffy gray ski jacket that I’ve only just realized–I hate.

I’ve shared this Paris story throughout my life as a comical testimony to amateur language skills and to my fervent devotion to this city. Baguettes. Cafe Au Lait. Eclairs. The Rodin. The Jeu de Paume. Le Seine. Vin Chaud. Shakespeare & Company.

“Zut Alors!” I screamed at the old man, retrieving the only expletive I knew in his language.

It must have been my right breast.

A month shy of 34 years later, I wake in the dark holding it.

I’ve had a dream, a nightmare really.

I am riding in the passenger seat of our Honda as my husband drives us up Main Street. As we pass the vintage shop, I see a lawyer friend walking three large dogs (one of which isn’t hers.)  I smile when I notice that it is the dogs that are walking her.

I lower the window to holler hello, and when I do, one of the dogs lurches at me from the sidewalk—chomping on my right breast.

(Even typing this makes me hold it again. Even editing makes me hold it. And now I recall the hours that the body worker spent circling that breast when I was in my late twenties, asking me what was there, and all I could muster was outrage at her touch which remained silent inside like this memory until now. )

Upon waking from the nightmare, the inexplicable sadness with which I went to sleep made sense.

“Sense,” is really important to me. I relied upon it as a child. Alcoholism. Affairs. Divorce. It’s how I digested the world around me. Viet Nam. Nuclear drills. Starving children. Sense is how I avoided being swallowed up by fear or grief or hopelessness.

When did I learn to let thoughts override feelings?

My mind flashes over the years in Colorado, the way our father challenged us to stand in the deep snow in our nightgowns, barelegged.

I so wanted to please him. To warrant his attention and praise.

All along my body persisted, aching like it had in the snow.

Headaches began in my teens, rashes in my twenties, two miscarriages before 30.

I was 36 (and the mother of two) when my own mother died, and I suppose this is when I truly surrendered to the journey back to the feminine.

Yesterday, two women flew up from my Mid-Atlantic roots to meet me, to interview me, to question me, to write notes on a yellow legal pad in pink ink. There will be no recordings, they said. We all nodded.

The night before I had put myself in a chat queue on the National Sexual Assault Hotline only to close the browser just as my turn came. (1-800-656-4673.)

Next I opened the page to our local crisis center and discovered that I could send an email. (advocates@womensfreedomcenter.net)

It’s easier for me to be vulnerable with my fingers than it is with my voice. It’s what led me to journaling at 18, and to publishing after my mother died.

The Women’s Freedom Center in Brattleboro emailed me back and suggested I put a call into an advocate the next day which I eventually worked myself up to do, just ahead of the interview. (802-254-6954.)

“I’m not in crisis,” I told the kind woman on the other end of the line. “It happened 3 years ago. Mild as far as the range of assault goes. I don’t have a career at stake. But I’m having these really intense feelings, and I can’t shake them.”

Facebook messaging was how I coaxed myself into first reporting the incident to the large organization 300 miles away. Fired up by the #meTOO movement and convicted in my response-ability (as a white, educated, middle-class woman with a platform), I spoke up on behalf of other women.

I wanted to dismiss what happened to me because I was embarrassed by it, ashamed that I had agreed to hug a man who then slid his hands across my ass. Appalled that at 50, I was still vulnerable to accommodating.

“Can you tell us exactly what happened that day?” the Human Resources Officer asked thirty-minutes into the interview. “We don’t want to trigger you, but we’d like to hear it in person.”

“I don’t mind talking about it,” I said.

They nodded. I proceeded.

Why do I remember standing?

That morning I’d spent an inordinate amount of time dressing for this meeting, falling into the cliche, ie. I wanted to look professional, not like someone who wanted her ass rubbed by a stranger, but I also wanted to have an ass that said that someone might want to rub it. (In the end, I just dressed how I wanted to be dressed for the events after the meeting.)

We were all sitting at a long table in a hotel conference room. Of course, I wasn’t standing.

Was I performing?
Why do I feel like I was on a stage?

How is it that is it already feels like a dream? It was only 24 hours ago.

As I relayed the incident, time slowed, and I was embarrassed to find my eyes filling with tears.

My self wouldn’t listen.

When did my emotions get the upper hand?

Menopause and #45 come to mind.

I hadn’t thought much about the ass-assaulting incident until his campaign… the video… the debate stalking… Jessica Leeds and more than a dozen other women’s stories of assault.

I should have been pleased that this organization responded so swiftly to my report rather than dismiss it. In fact, they dispatched two administrators on a plane in my direction almost immediately.

I wanted to say, NO Thank you, it was enough to do the telling once, but I told myself that this wasn’t fair to other women.

My body had something else to say about that sense of responsibility: headaches, dizziness, swollen eyes.

I’d met with my therapist the previous week. She immediately noticed my eyes. She sent me a note after our appointment:

These processes of going public with violating men ask you to be so reasonable and reasoned. Where do the anger and vigorous pushback go? Is it expressed in a safe place for you? Is it getting stuck in the windows of your soul, around your eyes? Such dilemmas–wanting to be of service to move consciousness along but… where does our vigor go? …STOP to the violators or stopped up in us?

Just before the interview, I began to lose my voice; while after the hour-long session was complete, I felt completely relieved; but then noticed that I was wheezing.

I attended two events after the interview, relieved at the distraction, except in those moments when I stepped into the silence of a restroom, and I felt a great sadness sweep over me.

On the drive home, up Main Street, past the vintage store, I asked my husband, “Why am I feeling so sad?”

This is what woke me at 3:30 this morning, to a dog biting my breast; and this is what brought me to the kitchen table to write about the City of Lights on this dirt road in the woods of the Green Mountains of Vermont on this rainy winter day.

It would be easy to continue grieving today with all this water, threatening floods, but I feel completely sober.

What I can see clearly now, is that even though I didn’t let these assaults define or disempower me, they lived on inside.

They said: You do not possess the dignity of bodily sovereignty.

They said: Your humanity is less than ours.

Until I felt the depth of that injustice–inside my body–I couldn’t claim what needed claiming:

4 thoughts on “Step back Motherfuckers”