Skip to content
HomePosts tagged 'fear of the unknown'

“Should you not listen well to the questions you ask out of nowhere?  Only in looking back do you find those crumbs you dropped that marked your way forward.”

-from A Year in the World, by Frances Mayes 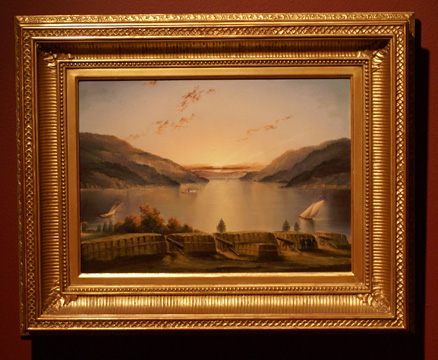 It was 1976, the 200th anniversary of our Nation, when my Gram whisked me away from the mighty banks of the Hudson at West Point to venture toward another mighty icon of American values–Walt Disney World.

The trip from New York to Florida stole three days of my young life.  At night, we pulled off to the side of the road and slept in Gram’s car–4 of us–including my aunts Col and Trish, who were just teenagers themselves.

On our way down the coast, we stopped for smoked fish purchased from a shack at the end of a long pier in the middle of nowhere, and ate it out of paper bags.

Once inside the great length of Florida, we pulled over at a farm stand for a sack of juicy oranges and sucked them down in the car too, leaving me with sticky hands that were left sticky for entirely too long for a first born child of two first born parents, one of whom was a surgeon.

I sang to pass the hours of the journey–hot hits from the seventies–lyrical icons of more American values– “I want to do something freaky to you…”  and “I believe in miracles, since you came along, you sexy thing…”  and, “That’s the way, uh huh, uh huh, I like it, uh huh, un huh…”

I also practiced saying that it was Disney “World” to which we were heading, NOT Disney “Land.” Disney WORLD was in Florida.  Disney LAND was in California.  This distinction was of utmost importance among children and took me years of practice and correction to get straight.

My other grandmother (and great-grandmother), on my father’s side, Nana Lila, and her mother, my Great Nana Burrows, steeped me in awareness of the WORLD–not Disney, but the world abroad–the one from my Nana B’s atlas in which she circled all the places that my great-grandfather Amos visited as a Merchant Marine–from South America to Asia–and also those places to which she accompanied him–just as many, just as far away.

Each Christmas, my Nana Lila gave me a small doll, dressed in costume from a foreign nation–in greens or reds or golds.  Over the years, I treasured this collection with dreams of visiting each homeland.

In the meantime, Nana helped me with my French which was her major at Douglass where she had plans of being an interpreter at the UN. Instead she settled into a life as a young mother and wife, and later enjoyed trips abroad.  When I came of age, she promised a cruise to the Top of the World. 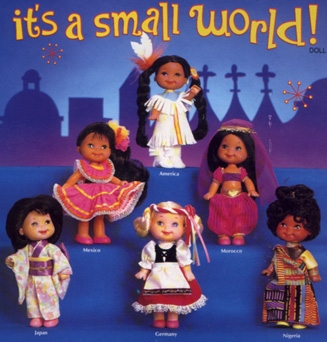 t’s no surprise then that my favorite place inside Disney was the 15-minute cruise around the Seven Seaways Canal surrounded by singing dolls dressed in traditional costumes–my childhood dolls come to life!

The installation of “it’s a small world” was personally supervised by Walt himself, originally created for the World’s Fair in New York City in 1964-65  in honor of the United Nations Children’s Fund (UNICEF).

My Gram attempted to bully me into braving the roller coaster inside Space Mountain, but I just kept taking the cruise of the seven seas and its neighboring attraction, Pirates of the Caribbean.  I returned home with my name engraved on an ancient coin and dreamed of my own adventures.

Though my Nana died before she could fulfill her promise to travel with me,  I set out on my own, a handful of years later, with a semester in London and return trips backpacking around the continent–including a visit to Paris in each season.

That wanderlust was left behind when I got a job, married, and became a mother.  Each of these were beautiful realizations themselves, but they quickly crowded out my place in the bigger world.

Certainly there were possibilities of travel in the twenty years that I remained stateside–from the teachers’ exchange program in the USSR to the International Schools around the world and many other small ignitions in between–but theses fires fizzled out shortly after they were fanned; and mostly I tried not to think about what I was missing.

Finally, I discovered Canada, and three family trips tickled my thirst for all things foreign, allowing me to pretend that I was back in Paris, delighting in French food and culture.

I explored the world on the Web too and made acquaintances across the great oceans. I entertained careers with international flair–teaching English to foreign students, working at the School for International Training, supporting others who traveled the globe–but nothing quite fit until I was so desperate that I forced myself out of the container that I had created to protect myself (and my family) from my love of the world…

On the day upon which I was to accept a public health position at a nearby hospital, I posted this plea to Facebook friends~

Just before I have to say Yeah or Nay,
I find & flirt with another job.
Insanity or cold feet?

Two days later, I sat in an interview chair under a banner listing 20 nations around the globe.  The mission was world peace–established through the experiment of living among others in foreign countries. Was it possible that I found work in my hometown which would connect me meaningfully to the world abroad?

When the director told me that the responsibilities included attending and facilitating the annual conference–which took place the preceding year in Paris–I almost fell out of my chair.

Following the interview, my husband mistook my delirious gaze for anxiety or fear.  It took me hours before I had the courage to reveal that this was bliss; and although it would be another two weeks before they would select their candidate, my certainty had bubbled up–inside.

The miracle was—that there was plenty of room–in my life–to remain rooted to my family and home–while celebrating my place in the world outside.

The question was–did I have the courage to claim it?

It took ten posts to get to this one. Here’s where I started: The Mask;

and here’s the post that follows The World in Me: The Alchemy of Alignment.