Tidal pools of rage and grief release into composition as my husband hangs the first load of the season out on the line.

33 summers ago, I hired him as a waiter because I had been obliged to do so (his mother sold us ad time), but I soon came to recognize, not only the fullness of his pleasure/presence ((oh, the gifts of a second son)), but his ability–to be male, and to be aware, of the world around him.

How many men does it take to screw in a lightbulb?

Because my husband likes routine and the physical world, and because I like systems and the world of contemplation, we complement one another, which, as we were once told, is the hardest relationship to thrive.

(Perhaps that first therapist had been wrong, but there’s still time.)

Because I did not marry my first love who adored me and “placed me on a shelf,” I was not only lucky in second loving, but wise.

If not for the man my husband is, I would not have space to be who I am ((rediscover who I am)) alongside being a wife and mother; though my mother found ways didn’t she–abandoning everything and starting over again, and then abandoning herself for that crime, almost entirely, until she arrived, near death, closer toward the center of her own life, where the men we love reside, with permission implied, just about everywhere…

How many men does it take to screw in a lightbulb?

Just one.
While he waits
for the whole world
to revolve
around Him.

Which is to say that the mother I am, the writer I am, the thinker and teacher I am, is in large part because of the man in the yard hanging the laundry, and because of that, I am fortunate and grateful and angry, hoping my granddaughter won’t need to rely upon the good nature of yet another man to carve out a center of her own. 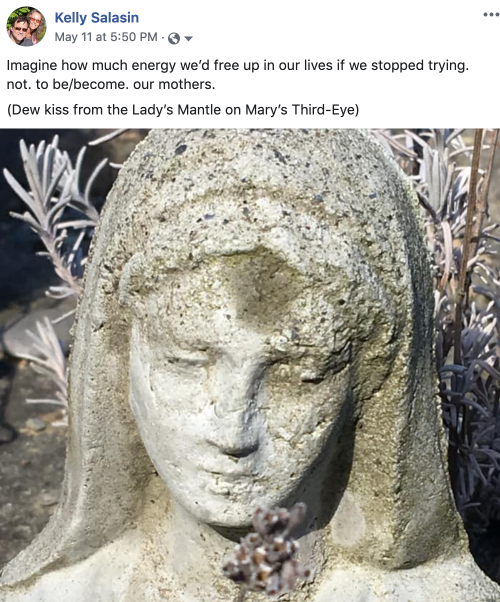